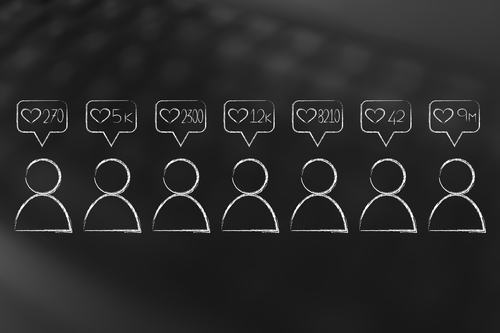 If you’ve ever marveled at the thousands and even millions of followers that some actors, politicians, professional athletes and other public figures have for their social media accounts, the New York Times has investigated a troubling trend showing that many of these followers were purchased. For pennies, you too can have your own acolytes to follow, like, or retweet your every post.

The problem with a lot of these followers? They aren’t real. Instead they are “social bots,” phony accounts created and managed by automated software. Some of these accounts clearly sprung from the mind of a computer, marked as they are by a lack of profile pictures and account names consisting of strings of nonsensical characters. Many of these fake accounts mimic real ones, harvested from real users in a ring of social media identity theft. Pictures, account names, and personal details are lifted and tweaked every-so-slightly to create new accounts that look authentic but are really façades for code.

Fake accounts have always existed, but with companies like the one profiled in the Times article designed around monetizing their use, the problem has exploded. Facebook itself tracks the phenomenon and in November of 2017 quietly raised its estimate of fake accounts from 1% to 2-3% of its user base. For Twitter, an easier platform for social bots to access, the figure is higher at 9-15%. While these percentages seem small, when applied to these platforms’ massive user bases, the numbers quickly balloon. For FB (2.2 billion active monthly users), that would mean around 66 million fake accounts. For Twitter (330 million active monthly users), the number comes in at 49.5 million accounts controlled in part by bots and the agendas of those who purchased them.

Why does this matter? Economically, social media is a booming advertising business where ads sell based on the “reach” they are promised to have. Politically, words can sway millions of voters. Socially, taste-makers promote the next, best thing. In all cases, there’s no getting around the fact that people give more weight to information when it appears to be supported/liked/shared by a crowd. The effect is compounded in the echo chamber that is traditional social media platforms: their algorithms are designed to further boost that which is already popular.

If you are fed up with trying to communicate in this online world of smoke and mirrors, there is an alternative. Go2s guards against phony accounts in multiple ways. First, Go2s starts by asking each user to verify her profile during setup via text and/or email. Second, Go2s is a private network that is designed to operate using one-way invitations. When you ask people to be your Go2s, you are offering to share your content with them. Until they choose to reciprocate and to make you their Go2, you do not have a guaranteed presence on their timeline. This is unlikely to occur when actual users are presented with suspicious, computer-generated or stolen-from-strangers credentials. Setting up thousands of phony accounts on Go2s is a dead end.