Can You Trust Facebook’s “Here, Together” Campaign? 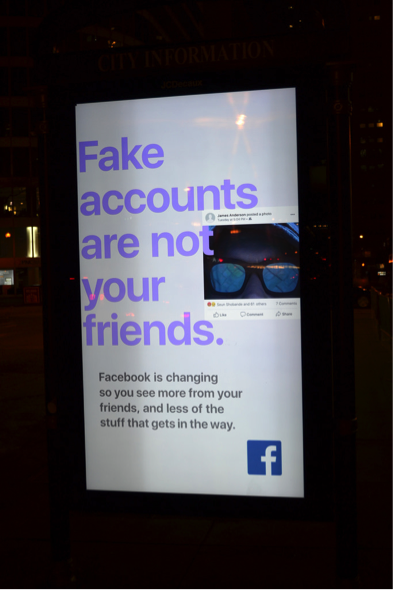 After a rough year, Facebook is finally attempting to rectify the numerous scandals that have displeased users and ultimately put its CEO in the hot seat before Congress. Much of the drama stemmed from the U.S. 2016 Presidential election scandal where Russian agencies used Facebook to influence U.S. voters. The scandals grew too large for Facebook to ignore – they were not going to blow over. Too many users were too upset about being shown fake news propagated by fake accounts. Too many people were too fed up with their data being used to keep them addicted to the app so Facebook could make more money off ad sales. Facebook had to face these concerns head on.

And so, Facebook is starting to answer the call.

Perhaps you’ve seen Facebook’s “Here Together” advertisement on television. Or, maybe you’ve seen an anti-fake news poster on your subway commute. Facebook’s new advertising blitz is an attempt to assure everyone that the social media behemoth has users’ best interests at heart. The core message is that Facebook will start to make their platform better at connecting people and fostering real relationships.

Isn’t that what Facebook is for – connecting friends and family?

Well, with everything that’s come to light in the past year, it’s clear that the only thing Facebook really seems to be for is its own financial success. They allude to this change in mission in the “Here Together” video when the narrator says “But then, something happened. We had to deal with spam, clickbait, fake news, data misuse. That’s going to change.” But as some viewers point out, the heartfelt message isn’t very compelling because Facebook does not state how that “something” will change. In the video, Facebook also does not assume any responsibility for the scandals and accusations they are facing. The phrase “then, something happened” makes their whole profit-over-people system sound like a surprise incident that was not any specific entity’s fault.

But the truth is, it has all been Facebook’s fault.

Facebook’s platform, designed to be as addictive as possible, keeps users scrolling longer so Facebook can sell more ad space to businesses. The platform is designed to keep people entertained so Facebook can make more money. And now suddenly, Facebook has been drowning in bad press because this insanely powerful platform is creating unhappy users and facilitating election fraud. Facebook has been forced to address the problem.

Do you believe the “Here Together” campaign? Do you trust that Facebook will now start to protect your privacy and take good care of your personal information?

At Go2s, trust has been our foundation since day one. We have been “here, together” from the very start. We’ve always believed and practiced what Facebook is now starting to learn: that real, meaningful connections make people’s lives – and ultimately the world – better. Start something meaningful on a platform you can trust at www.go2s.com